Difference between revisions of "Bright Wizard" 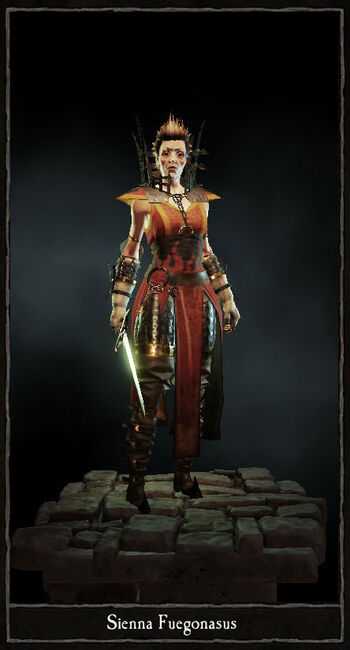 The Bright Wizard is a hero character in Vermintide.

Sienna Fuegonasus is a fiery tempered Bright Wizard who roams the land in a constant search for opportunities to indulge herself in the ecstasy of pyromancy[1].

Blessed with a sharp intellect and a wicked sense of humour, Sienna will generally pass for a well-adjusted individual, as far as wizards go. Those who witness her in battle, however, will soon catch a glimpse of how deep her dependency on the adrenaline rush of pyromancy has taken her.

Sienna arrives in Ubersreik as the prisoner of a Witch Hunter, Victor Saltzpyre, and guarded by a former State Trooper, Markus Kruber. A trial indeed awaits, but of a different kind than they all expected.

Sienna travelled to the Empire from her native Estalia when she was young. She was sent away from the village by her parents as vicious rumours whispered that their daughter was a witch. Sienna travelled with merchant caravans, slowly making her way across the Old World to Altdorf, where – she’d heard – wizards were forged.

With the help of a Grey Wizard, who Sienna grew to resent due to his treacherous nature, she finally arrived at the College of the Bright Order in Altdorf.

Sienna mastered the Lore of Fire in Altdorf, but it soon became abundantly clear that she lacked both passion and patience for scholarly pursuits. She could not stand the slow pace of College life, and instead, she felt a void inside her that could only be filled by the addictive rush of intense spell casting. Fire magic became Sienna’s drug of choice, and she realised that she was unquestionably an addict. Accepting this fact, she decided to blaze her path through life, and has never looked back since.

Fellow Bright Wizards were wary of Fuegonasus’ temper and desire to always challenge herself to the extreme. She always strove to create the highest flame walls, the hottest fireballs or to summon the most impressive Conflagration of Doom. Her peers warned that the Wind of Aqshy was not something to play with, but Sienna saw it quite differently. She knew she needed the pyromaniacal rush of magic to not wither and die, so this was her way, and no other option would do.

Fuegonasus has since then wandered the world, always testing her powers but, as yet, always failed to find her limits and stave off her hunger for more.

Like many of the Bright College, Sienna has a fiery temper and is quick to anger, but there’s still room in her heart for morality and compassion. However, her addiction to fire magic is what truly shapes her life. She roams the land, offering her services as a battle wizard to anyone who can provide her with an opportunity to make things burn and get her adrenaline flowing.

Sienna harbours a wicked sense of humour that spans from the droll to the outright bawdy, but is at most times forced to wear a mask of calmness and control to hide her addiction. In the midst of battle, her facade frequently cracks, and one would have to be both deaf and blind to not notice the rush of magic power she exudes.

Sienna was aware of this problem. To gain further attention from the Witch Hunters was the last thing she needed. But recently, that is exactly what she got. Arrested under the suspicion of having killed the son of the Burgomeister of Ubersreik, and burning down his mill, she is now in the custody of Victor Saltzpyre, a veteran Witch Hunter. Saltzpyre has hired a skilled and experienced State Trooper, Markus Kruber to assist him in escorting the dangerous Bright Wizard to Ubersreik. Sienna returns to the town as a prisoner, ready to stand trial for a heinous crime, in the eyes of the Magistrates.

Being a Bright Wizard, Sienna is always seen with a Staff in her hand. The Staff is used to channel her magic, and she can choose from a selection of Staves that will focus her magic into different attacks ranging from a concentrated beam of intense fire to a large flame column bursting up from the ground. Sienna needs to keep herself in check though, or she risks immolating herself. Use too much magic and the flames will turn on her. For close range combat, she can use her Wizard Sword or Flaming Sword to hack, slash and burn through the Skaven, or opt for the Wizards Mace to bash armoured enemies into bloody submission.

Swings of the Wizards Mace can hit multiple foes, and most importantly, shows promising potential in the art of decorating walls with vermin brain matter.

Sienna Fuegonasus most important tools are her Staves, and depending on which one she uses, she can combine her spells differently to achieve the most fiery and spectacular result. Each staff combines a heavier and lighter spell, allowing her a range of options and tactics in combat. Sienna needs to keep herself under control though, or risk immolating herself instead of her foes.