Difference between revisions of "Dwarf Ranger" 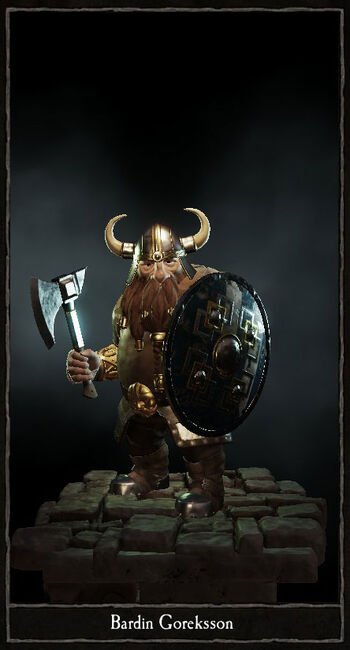 The Dwarf Ranger is a hero character in Vermintide.

He may be the shortest in the group of heroes, but the Dwarf Ranger Bardin Goreksson certainly makes up for it in ferocity, determination and spirit. Gregarious, prideful and not afraid to offend, Bardin is frequently seen charging into the thick of battle, axe or hammer in full swing and leaving a trail of Skaven corpses behind him. Once the victory is assured, he will be the first back to the pub, roaring and laughing at the top of his lungs in a manner only is a dwarf is capable of.

Bardin is a Ranger of the Grey Mountains, keeping the holds of Karak Ziflin and Karak Norn safe from overground attacks. Rangers rove far and wide, always on the lookout for enemy activity. It was on one such expedition that Bardin came across an abandoned mine entrance. The mine was clearly Dwarf in origin but, having spent countless decades ranging across the Grey Mountains, it was not one Bardin was familiar with. The mine entrance must have been hidden until recently, perhaps revealed by a rock slide.

Without a moment’s thought Goreksson entered, only pausing to bring out his trusty axe. The mine itself was much as he expected – long since exhausted of any precious ore. Further in, the Ranger came across something of interest, four Dwarf bodies clothed in now-rotten rags, but rags that may once have suggested a lengthy journey was imminent. Next to the Dwarf bodies was a mound of long-dead rats and the unmistakable corpse of a ratman. In its clawed, skeletal hands was a small tattered piece of parchment, the Dwarven letters of the Klinkarhun inscribed on it.

Within the backpack of one of the Dwarf dead was another torn piece of the same parchment. Bardin put the parts together and discovered, to his quickening heart, that he had an ancient map. What excited him so was the map’s destination, that of Karak Zorn – the infamous lost hold of the Dwarfs that lay hidden somewhere along the Worlds Edge Mountains in the Southlands. The map was of limited use though, as half the map keys and riddlespeak was in an unfamiliar variant of Klinkarhun.

Upon return, Bardin made several attempts to find funding and clan-backing for an exploration party but found was refused laughed and scorned from every Hold in the Grey Mountains, a humiliating fact which only steadied his resolve in the matter.

He now journeys to Ubersreik, as word has reached him from the large Dwarf community there. It is said a shop of antiquities on the edge of the Marktplaz holds a large Dwarfish tome. According to the rumour-smith he paid honest Dwarf gold to, the book’s page are covered in faded runes written in an long-disused version of the Klinkarhun, and could very well be the key to understanding the map to the lost hold. The Ranger is on his way to purchase this tome, after having negotiated a fair price. Of course, what Bardin considers a fair price maybe totality different to the shopkeeper, but the Dwarf's skills of negotiating – shouting very loudly until he gets his way – are formidable.