Difference between revisions of "Empire Soldier" 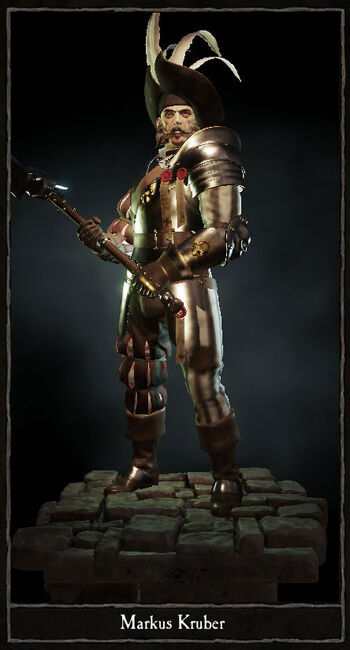 The Empire Soldier is a hero character in Vermintide.

Having fled farm life outside Ubersreik, a young Markus Kruber found himself in the Grunburg local militia and quickly rose through the ranks. A schism with an inept superior eventually spiraled out of control, and resulted in a relegation to Ostland. Being sent from the richest province of the Empire to one of the poorest and most war-ravaged was clearly a punishment, but Kruber welcomed the change. He hoped that competent leadership and a steady stream of purposeful action would await him at his new post.

Leading the 8th Ostland Swordsmen, Markus drilled his troops until perfection, not content until their swords and shields felt like natural extensions of their own bodies. His leadership style was somewhat unconventional, inspiring confidence and loyalty not only through his prowess, but also due to his innate charisma and wit, making him immensely popular with his men. His unit was distinguished in several battles, whether it was breaking through Greenskin lines, repulsing marauding Beastmen, or hacking down ravaging berserker Northlanders.

Markus Kruber’s humour and disposition earned him the respect of his men.

It was a Necromancer who was to be Kruber’s undoing. The Undead marched on a grand muster of Imperial might. Kruber’s regiment was on the east flank, forming an impenetrable barrier against the skeletal forces they opposed. For a while it looked as if the Ostlanders sensed victory and fought with extra ferocity to that end. But then the Sergeant caught sight of a wizened old man leading a horde of Zombies. In a freak moment their eyes locked, the Necromancer grinned, and went about casting his death-magic. Moments later, a colossal orb of purple-edged darkness swept through the Swordsmen, killing all it touched while sucking the souls from hapless bodies. One of the men pushed Kruber out of the way, his own soul selflessly sacrificed.

At the end of the battle, the Undead had dissipate and the Empire was victorious, but it was a Pyrrhic victory for Markus. His regiment had been destroyed, and he emerged as a traumatized lone survivor. In a state of shock, Markus applied for leave, wishing to quit military life and simply head for home, but was denied.

However, after some time, Victor Saltzpyre, a Witch Hunter on business in Ostland, crossed paths with Markus. The Witch Hunter was recruiting for an upcoming mission, and after witnessing a display of Kruber’s talents in a roadside ruckus with bandits, he convinced Kruber’s superiors to let him go.

Assisting the Witch Hunter in escorting a Bright Wizard prisoner, the company heads for Ubersreik, where the mage is up for trial.

Markus prefers using heavy weapons and putting considerable power behind his attacks. A smile of delight can often be seen on his face as he sends multiple rat-men flying with a mighty swing or delivers a skull crushing blow with his Great Hammer. Kruber is known to casually balance his Great Hammer on one shoulder, ready to strike down any foe who dares to approach. He is also a master of cutting Skaven in half with the Great Sword , stunning and knocking back enemies with a One Handed Mace or using the Sword and Shield combo to his advantage.

For those situations where Markus feels ranged weapons are the answer, he’s partial to his trusty Blunderbuss, a devastating close range weapon. When a high volume of fire is required, he prefers his experimental Repeater Handgun. It allows Kruber to either quickly fire off individual shots or the multiple barrels can be spun to fire off the all barrels in one burst. If the enemy is heavily armored, Kruber can bring a heavy Handgun, capable of piercing the thickest of armor.