Difference between revisions of "Ratling Gunner" 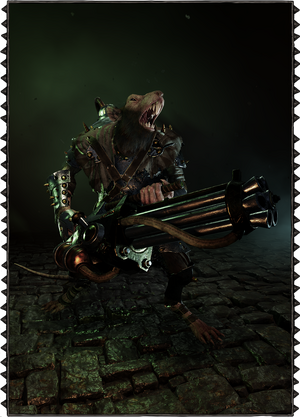 "The Ratling Gun is a six-barreled monstrosity of a gun, powered by warp steam and operated with a hand crank. This fearsome weapon of unparalleled rate of fire is normally operated by a Clan Skryre weapons team, but the version deployed in Ubersreik seems to be of a lighter, experimental type, capable of being moved and fired by a single Skaven

Encumbered by the weight and unwieldiness of the weapon, the Ratling Gunner is far from quick on his feet, but once he cranks up his weapon and opens fire, warpstone laced hell is unleashed. Single minded and persistent, the Ratling Gunner will pick a target, and then continually track it, firing relentlessly until either the weapon jams, needs to reload or the Hero lays dead and shredded beyond recognition.

Much like his colleague the Poison Wind Globadier, the Ratling Gunner won't let a small fact like Clanrats or Skavenslaves blocking his line of fire stop him. If a Hero can keep her wits about her (or him), the Hero can make the Ratling Gunner mow down his kin, whilst dodging from cover to cover. However, be sure to not get caught in the open, or face a rapid fire death in a hail of warpstone gunfire. "