Difference between revisions of "The Empire"

The Empire lies at the heart of the old world with civilization on its ground. The Empire is ruled by emperor Karl Franz who rules from his court in the Imperial capital city of Altdorf. There are ten provincial states in the Empire, each ultimately ruled by an Elector Count who is loyal to the emperor. Since the Empire has many enemies such as Chaos, Greenskins and Skaven it is necessary for them to be able to organized and unite under one banner. The Empire's biggest ally are the Dwarfs who helps them in times of need. Together they try to survive the endless hordes of their enemies and hold their place in the old world.

The Empire in the end times

When the end times came the Skaven saw their chance to conquer the world above them. Many of the empire's cities and villages were raid by the Skaven army. Although the Empire fought hard, the hordes of Skaven and Chaos were too much for them and soon they would make their last stand to save the world from destruction. 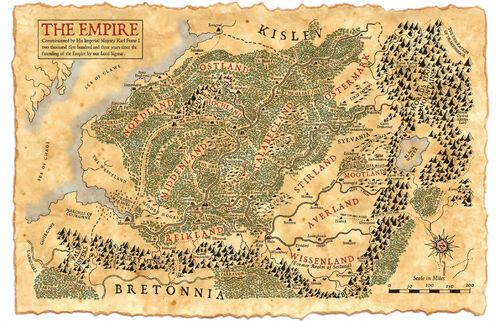