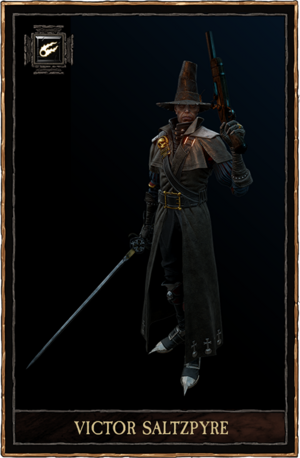 Witch Hunters seek to punish those who dare employ fell sorcery or consort with the agents of the Dark Gods. When battle rages and the conjurations of vile wizards burn the skies above, Witch Hunters are often all that stands between an Empire soldier and a most unnatural death. Victor’s obsession with the Skaven has unfortunately led to friction with his superiors, preventing him from being promoted to Witch Hunter Captain. Additionally, his lack of objections towards working with other races separates him even further from his fellow members, even if he draws the line at not allying with anything outright evil or daemonic. In Victor’s eye, the end justifies the means, and he is ultimately willing to fight alongside anyone as long as they are not apparent enemies of Sigmar and the Empire.

Victor Saltzpyre was the son of a talented blacksmith who found work with the Order of the Silver Hammer. While apprenticing for his father, a Witch Hunter Captain recognised Victor’s raw potential, and sought his father’s leave to train the boy. Victor survived the gruelling witch hunter rituals, where many do not, and eventually embarked on a life-long battle against the foul creatures blighting the Empire.

Twenty years later, Victor was hunting a Vampire’s thrall. The girl had once been daughter to an influential burgomeister, whose great fortune had been built on mining. After a thorough investigation, Victor discovered his prey by a warpstone seam, deep in her father’s mine. As he prepared to strike, a band of Skaven sprang from nowhere and attacked.

In the wake of a long and gruelling struggle, Victor emerged from the mine, sorely wounded, but alive. He’d lost an eye, but had gained renewed purpose in exchange. Soon after, Victor learned that the Burgomeister knew of the Warpstone in his mine, and had profited greatly from it. Not content with a single act of treachery against his Emperor, the scoundrel had been covertly selling it to both the Skaven and the vampire who controlled his daughter. It had been only a matter of time before one customer sought to eliminate the other.

After hanging the burgomeister, and those merchants he deemed accomplices, Victor walked away a changed man with grander priorities. He scoured the land for information about the Skaven, and sought assignments that bore the telltale signs of their involvement.

No one knows for sure what exactly happened in the mine, or why that incident became such a life-changing event for Saltzpyre. To this day, he has never divulged the details. Trust is not a coin a Witch Hunter deals in, but perhaps… just perhaps… a warrior strong enough to share the burdens of his quest will learn the secrets of Victor Saltzpyre, Witch Hunter of the Order of the Silver Hammer.